Hope you all had a nice weekend :). We had another busy wedding filled weekend. Below is a summary with lots of pictures.

Friday: Up early and out the door by 6 am. Drove to Virginia for the wedding rehearsal and rehearsal dinner. The dinner was Hawaiian themed and was held in a park. It was very laid back and a lot of fun. 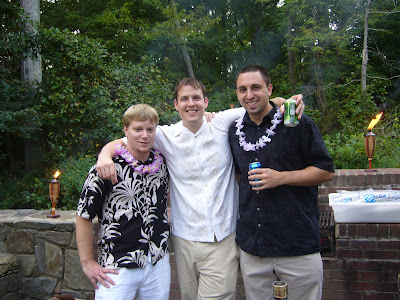 Josh and I (I wore the multi dress to the rehearsal dinner): 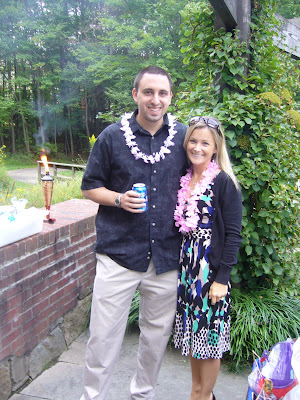 There was a LOT of drinking that took place on Friday night. I didn't join in, but did help form the beer-sphere seen below: 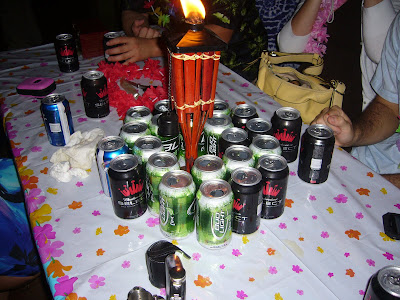 Saturday: Up early again and snuck in 6 miles on the gym treadmill before the wedding. The groomsman and groom messing around pre-wedding: 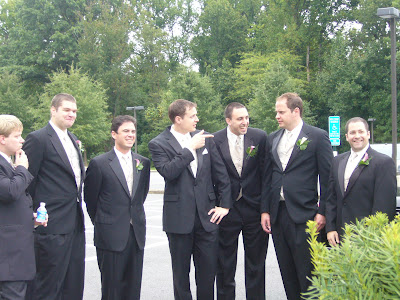 Josh and I (there were like three cameras clicking away here so we're both looking at different ones haha): 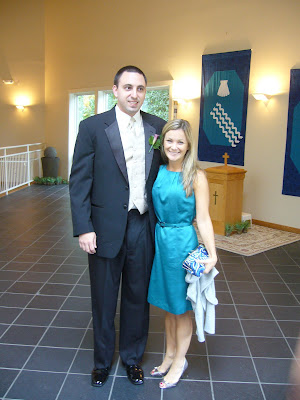 The ceremony was beautiful! Here is a picture of the gorgeous bride (in a dress her mom MADE) and the handsome groom: 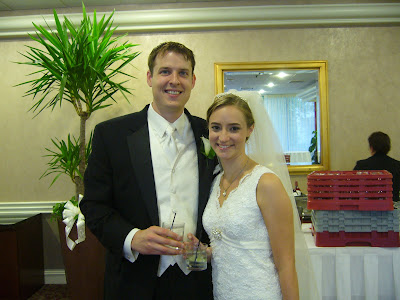 One of the best parts of the wedding was that Josh's parents were also invited! Here is a picture at the cocktail hour of Josh's parents (left), Josh, and two of Josh's friends, Ryan and Michelle: 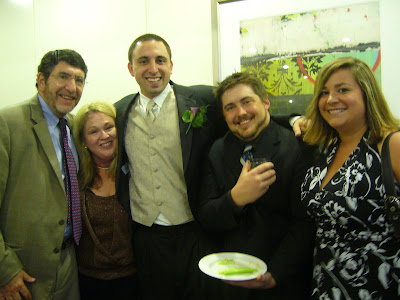 And me and some of the dudes: 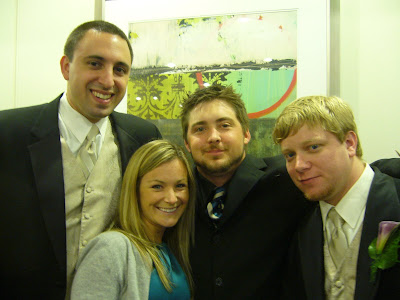 The reception was a blast filled with good food and dancing. Below is a picture of Josh, me, and Josh's parents: 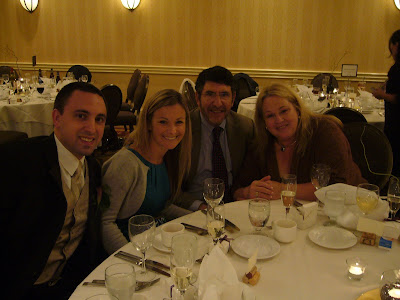 and Josh and his friend Andrew: 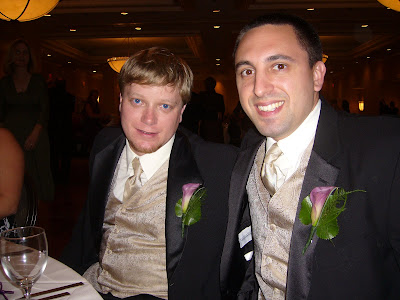 They provided the BEST vegetarian dish I have ever had at a wedding. Veggies and a phyllo purse filled with Israeli couscous and more veggies all served with a black bean sauce(YUM!): 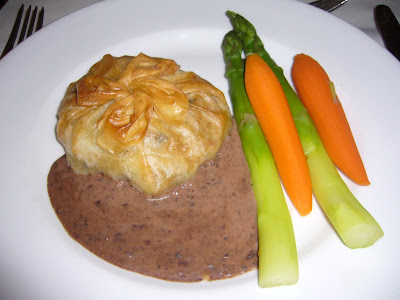 We crashed HARD last night and were up early early again this morning.
Sunday: Since I knew I wouldn't have enough time either this am or this pm to fit in my entire workout, I decided to divide it up. I hit up the hotel gym for three miles running on the treadmill before we left for SC. Upon returning home, I went food shopping, did another three mile run outside, and did TONS of laundry. We also picked up Franky and I gave him a bath.
Our friend Jeremy came over for dinner. He and Josh had burgers and grilled fries: 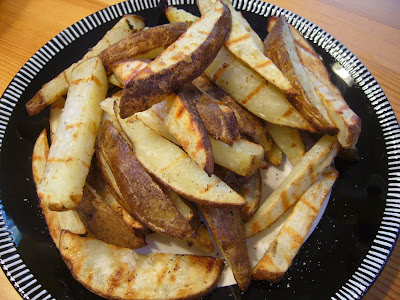 I had grilled peaches and veggies with marinutta sauce: 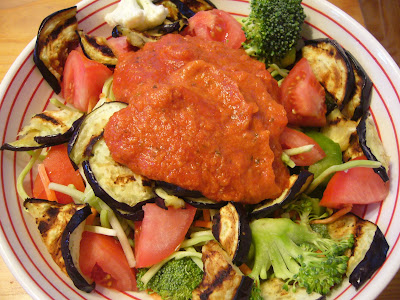 I also had some fruit and cereal on the side (what a random dinner ;)). Now, I am watching football and considering going to sleep. What was the best part of your weekend?
Posted by Erica at 7:38 PM

Great pictures of u guys from the wedding! That vegetarian dish looks incredible. And grilled peaches?! They sound great! Enjoy the rest of your
night!

What a fun weekend! That's so great that you got to spend a little time with the in-laws. :)

Glad you enjoyed a fantastic weekend.
Have a great start to the week love!

LOOOOVE your dress!! So glad that the wedding was enjoyable.

I love the blue dress an I really need to try that marinutta sauce...

Great idea about splitting up your workout!

What a fabulous vegetarian option. Usually they are really, meh, but I bet some people were jealous of this one!

Favorite part of my weekend was getting Sunny (I'm dog-sitting), and starting to think about getting a puppers of our own!

Where in Virginia was the wedding?

You were in my state this weekend - what up VA! Close to Richmond by chance?! Best part of my weekend was all the fabulous food I cooked/baked/ate and fun times with the man at my friends wedding and hangin' with his fam :)

Great weekend! Wow, I can't believe that delicious sounding vegetarian dish at the wedding. So rare.

LOVE that color on you! I also love the looks of those fries:)

What fun and wonderful pic's!

Went to the movies!

You look so frickin' cute in that dress and in all your photos!! Glad you got a good veggie dish at the wedding!

Looks like you had a great weekend! The best part of mine was doing absolutely NOTHING all day today except watch SATC. So lazy, so amazing.

wonderful wedding pictures! :) glad it was so much fun!

oooooooo weddings! I have one to go to in octobeR! i am so excited!!!

you look gorgeous Erica!! I love both of those dresses!!!

glad you had a nice time!!

my best part of the weekend, well this weekend it was seeing all these crazy kitchen gadgets at crate and barrel OH and obviously cooking!!

Come by my blog tomorrow, I'm giving away a great vegetarian cookbook! I think you'll like it!

My favorite part of my weekend was my little guy's flag football game Friday night. He was so happy playing and we went out for pizza afterwards.

You certainly know how to live it up on the weekend :o) Love the pretty pictures of you and your fabulous outfits, as always! Also, that vegetarian dish DEFINITELY looks amazing. I'm going to keep that one in mind...it'd be nice to have something appetizing for vegetarians at ours!

Best part of my weekend: running a 10k in honor of my grandma.

What a gorgeous wedding! Everyone looks so happy, and that phylo "purse" looks divine.

The best part of my weekend was spending time with my friends and family!

Looks like a great weekend. Love the veggie dish at the wedding and very cute dress!

I love the blue dress...so pretty on you! I'm glad they had such a lovely vegetarian dish. I'm impressed with the presentation.

What a beautiful wedding and delicious eats! You look gorgeous in the blue dress!!

hey girl I LOVE that blue dress you wore to the wedding! so pretty :) what a fun weekend :) you are invited to SO many weddings!

I love that you even squeezed in workouts here and there when you were on the run and such! glad you had a fun time!

Grilled fries?! That's new for me. And I'll take it!

What a fun wedding!! Your dress is beautiful - I love that color. :-)

It's good to see a yummy veggie meal - for once not a huge pasta dish!

Glad you had a great weekend!

Your dress was such a beautiful colour and looked very flattering on you!

I agree that the vegetarian dish looks fabulous! Oh, my... :)

Such a nice wedding! I love all of your dresses.

what a fun weekend, adn you look so cute! the veggie meal sounds awesome!

beautiful pictures. I love the dresses you wore :)

My favorite part of this weekend was going running with my husband. We are slowly getting the hang of it.

Aw what a fun weekend! I love all the pics and that dress is super cute!!!

Man busy weekend! I bet you guys are ready for wedding season to be over already :)

That is an awesome vegetarian option! Usually it's just some boring pasta dish.

girl you're making me tired with all these weddings! you were lucky to have them accomodate you with a veggie dinner--that is hard sometimes when traveling.

seriously I love weddings (at least for people I know), you get to connect with people and everyone is SO HAPPY!!

You look beautiful! I love both of those dresses!! What a great wedding - that vegetarian dish is one of the best things I've seen. YUM!

The bride's mom made that dress?! Wow, she's talented!

That blue dress looks gorgeous on you!

what a fun recap! all the photos were great, loved both dresses you wore AND the bride's dress, wow! the grilled fries looked super good. you and josh are SUCH a cute couple!! short girls are the besssst.

Grilled peaches are absolutely amazing are they not?! Lovely wedding pics too. Love me a good wedding!

goodness you and josh are just TOO cute for words!! love your blue dress :) sounds like you had a blast this weekend!

My weekend highlight was a retro popcorn maker! :)

Great wedding pics! We had my sister's wedding this weekend and I am falling asleep on the couch, but I am in withdrawal from not reading blogs! :)

Nice pictures! And the food looks delicious of course!

The wedding food looks delicious! You look great in both dresses! Where do you shop>

Looks like you had another fab time! And that dress--her mom made it? Amazing!

Erica, you look absolutely beautiful. Is blue your color? Wow. You and Josh are fabulous. I love your perfect pose. Looks like ya'll had a blast :)