How are you? I am doing very well this Sunday night! We had a nice day. We slept in really late and then I got up and started to learn the new Body Step. My Aunt called saying she, my Uncle, and my Cousin were coming down to the area, so we went out and met up with them for some lunch and we showed them where our new house will eventually be :) We came home and I did a quick run outside, practiced some more Body Step, and then ran into the gym for a little. When dinner time rolled around, I was notttt that hungry. I decided I would make something up for Josh and that I would just sort of nibble. For Josh, I made up two of these sausages: 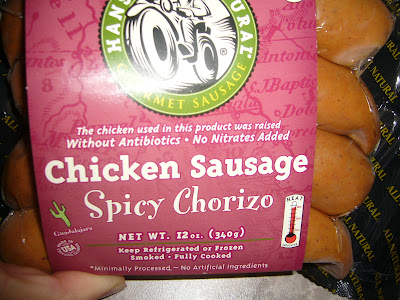 and baked them up with some pineapple. I served both with fresh vegis. 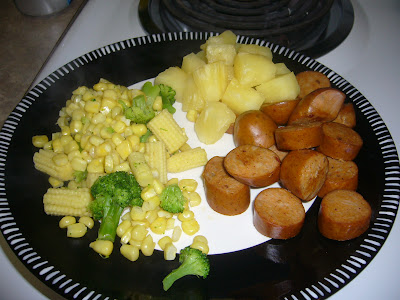 He said he really enjoyed the sausage and that they're very spicy! He liked them much more than the apple version. I snacked on some pineapple, a little bit of corn and then made a sort of random mix of apple, yogurt, granola, and rice crispies. 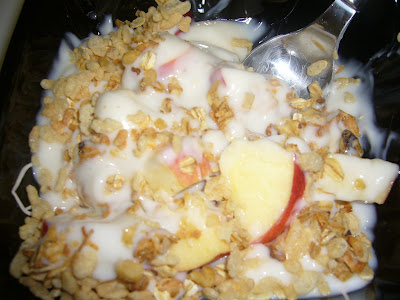 I am feeling pretty full but may want something else in a bit...we shall see ;)

Ok all! I need some recipe help!! Josh and I are headed up to my Aunt's house next weekend for dinner with her family, my parents, and my grandma. I am in charge of dessert :) I am making an apple pie with oatmeal cookie crust but I also need to make a pumpkin pie. Pumpkin pie is my dad's favorite and my mom makes it for his birthday (Halloween) every year. Does anyone have a really good recipe? Let me know!!!!

apple pie with oatmeal cookie crust??? may i please come? haha
when i make pumpkin pie, i usually use the standard recipe (nothing crazy) but i have made this pumpkin mousse before: http://www.foodnetwork.com/recipes/dave-lieberman/pumpkin-mousse-recipe/index.html
it's really easy and elegant!
i looked online to see if there were any "special" pumpkin pie recipes, and this one looks delicious, with a pecan crumble topping:
http://www.foodnetwork.com/recipes/food-network-challenge/pumpkin-pecan-crumble-pie-2003-1st-place-pumpkin-recipe/index.html
can't wait to see what you end up making!

Fabulous Sunday you had!!


I (and all my taste-testers!!) HIGHLY RECOMMEND THIS RECIPE FOR PUMPKIN PIE:

My mom makes a killer pumpkin chiffon, but might be different than what dad wants :)

my mom!
I've never made one.
What a nice dinner you had! I love bowls of crunchy stuff mixed with yogurty stuff. :)
Have a great Monday!

Eeek! I am looking for a good PP recipe, too. I have a good one for diabetics (it's basically just PP without the crust...a couple of our familiy members are diabetic), but I don't know how non-diabetics would like it. :-) Let us know which one you choose!!

I have no recipe here, but I'm excited to checkout what other commenters have suggested!

Wish I could help you with the pie, but I really dislike pumpkin pie. Josh's dinner looks yummy though!

What a lovely Sunday! I hate when I can't get hungry at dinner time, and I KNOW I need to eat, sometimes you gotta just make whatever you're feeling! Love that yogurt combo :)

Ooo dessert...I would definitely check with the Cooking Light website, I made some pumpkin muffins from there, and they turned out fab! Have a great night/morning :)

glad you had a GREAT WEEKEND!

and you know better than to ever as me for a recipe :)

Id direct you to the whole foods bakery area...

Can't wait to see the results of your pumpkin pie recipe search! I usually use a very standard recipe that I find at food network or in the Joy of Cooking. Good luck!

My mom and I follow the recipe in the Libby's Pumpkin label and it's awesome. Just classic pumpkin pie. But, I saw in Rachel Ray's magazine a recipe for a caramel pumpkin pie. I looked online, but couldn't find it. It's in the issue that's out now.

My eyes are glued on the chorizo sausage. Easy dinner or not, I can eat sausages basically...anytime. Pumpkin pie..my host family makes very good one, but err..since I don't bake often, I don't have it in my recipe book. When I think pumpkin pie, I think of Southern food, so maybe..Paula Deen has good one, in foodnetwork.com. ? ;)