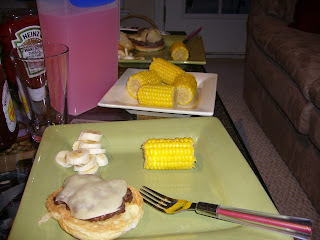 Busy Monday! I finished work and took Jill's turbo kick class- which was fabulous, as always! Afterwards, I went to Josh's softball game! It was a great game that went into extra innings and Josh's team won! Afterwards I made hamburgers. I used 93% lean beef, added a couple tablespoons of bbq sauce, and a sprinkle of Montreal steak seasoning. They were delicious- I ate mine on a half a bun with low sodium provi cheese, a half a banana, and corn on the cob! Fun, all-American dinner.
Posted by Erica at 9:01 PM