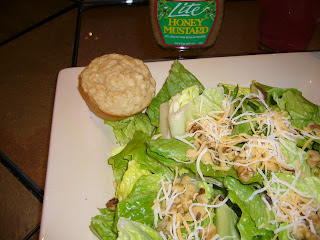 What a busy day! After work today, I decided to take Body Pump before I had to teach Turbo Kick. Jill's pump class was awesome (man are my legs feeling it) and teaching Turbo after wasn't as bad as I thought it was going to be - although by the second half I was pretty tired! After class, I stopped by Michael's to pickup some gift wrap stuff for my cousins bridal shower this weekend and also for some baskets I am putting together for Father's day! I then shot over to Josh's softball game. I came home to make some chicken to serve with salads, as well as to make these quick oatmeal biscuits. Since it was a Quaker oats recipe, I thought they would be delicious. As I was mixing the ingredients, I could tell the texture wasn't right. I added some additional oats and threw a few in the oven for a test run. They came out very flat and not very biscuit like! I added some additional flour, oats, and brown sugar and baked them in muffins tins. They turned out pretty well thank goodness! No recipe for this set of accidental muffins, only a picture. Have you had any cooking disasters or almost disasters?
Posted by Erica at 10:20 PM

I need to shift my cooking thinking to this: accidental something can be your NEXT new find!

Yes! Many of the wonderful inventions and recipes around us were created by pure accident! Your disaster could be the next big thing!

I LOVE pavlovas, and about a year ago I made a few in a short period of time.
As I was putting one in the oven, the weight of the pavlova made the parchment slide and it fell on to the door!!
After two moments of frozen panic and shock, I salvaged about 2/3 of the pavlova and wiped off the oven door. I smoothed the pavlova out and baked it. It was still good, but man. ;-) I guess I'd say it was a mini-disaster since I saved it, but any baking involving a racing heart fits I'd say!

Sarah- haha- thanks for the story! I have def also had something slide off a cookie sheet onto the door before! I'm glad you salvaged the pavlovas! I have never had one- do you have a good recipe?