How was everyone's week? Any fantastic weekend plans? I'm pretty darn excited for my end of the week/weekend festivities. Tonight was an awesome beer tasting at Bryan and my favorite spot, which I will be telling you a little more about later =), tomorrow will be relaxing (hopefully) and maybe catching up on some Boardwalk Empire (crazy good new show on HBO), Saturday is Daisy's Place rescue event with Daniel Island Park Day, and Sunday is a ROAD TRIP (with one Miss Erica and hubby) to Columbia to see one of my favorite comedians/all around crazy dude do his stand up =)

Soooo let's get back on subject here, let's talk about pumpkin...more specifically, pumpkin bread, pumpkin cupcakes...I mean, this is serious business. And, FYI, I think I have stocked up now on a total of 6 cans of pumpkin...Yep...6...Is that too much? I'm so worried that when I need it, I won't be able to find it. What is with this pumpkin shortage man? So what that means is you'll probably be seeing a good bit of baked pumpkin goodness of all variations between now and the end of the holidays =)

Ok, so here goes my pumpkin baking extravaganza for today. I got this recipe from the Paula Deen magazine 2009 Christmas issue; it is so easy! It is also, for all intents and purposes, a pumpkin bread recipe made for two 8x5 inch loaf pans. HOWEVER, this recipe is so fantastic, I decided to use half of the batter for a loaf of pumpkin bread and the other half for pumpkin cupcakes. If you want, you could cut this recipe in half for just one loaf or one batch of 12 regular sized cupcakes. This bread turns out incredibly moist and full of pumpkin and cinnamon goodness - and may I add they make your kitchen smell AMAZING. Here we go...

In a large bowl, beat pumpkin, oil, water, and eggs at medium speed with an electric mixer until smooth. In a separate medium bowl, sift together flour, baking soda, cinnamon, nutmeg, and cloves. Gradually add to pumpkin mixture, mixing well. 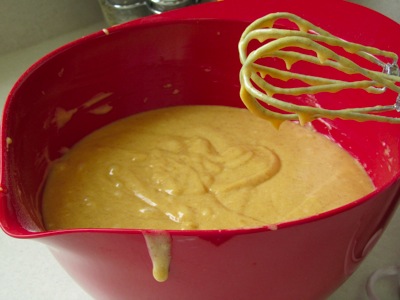 Pour into prepared loaf pans and bake for 55 minutes to 1 hour 5 minutes, or until a wooden pick inserted comes out clean. 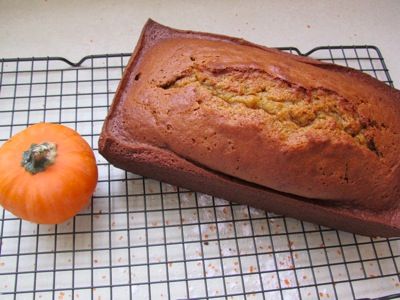 So, in my case, I used half of the batter for cupcakes. I filled my prepared cupcake liners about 2/3 full and baked for 20 minutes. 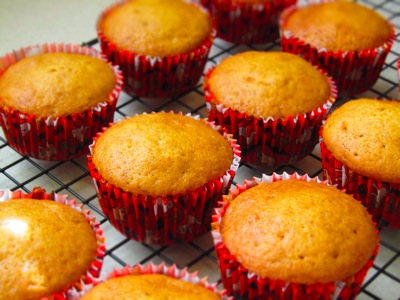 I also used an amazing cinnamon cream cheese icing recipe I found from Joy the Baker's blog to ice my cupcakes. I ended up doubling the recipe exactly for all 12 cupcakes. This stuff turned out to be the perfect compliment to the pumpkin and was just the right consistency for piping after the cupcakes cooled! I then sprinkled with a little orange decorating sugar. 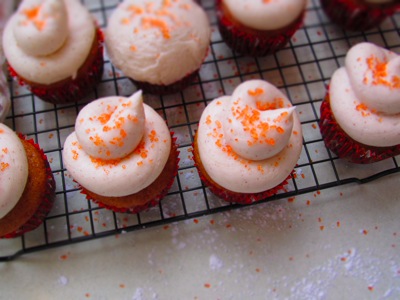 In a large bowl, beat pumpkin, oil, water, and eggs at medium speed with an electric mixer until smooth.

in a separate medium bowl, sift together flour, sugar, baking soda, cinnamon, nutmeg, and cloves. Gradually add to pumpkin mixture, mixing well. Pour into prepared pans. Bake for 55 minutes to 1 hour and 5 minutes, or until a wooden pick inserted in center comes out clean. Let cool in pans for 10 minutes. Remove from pans, and cool completely on wire racks.

Note: if you want to use half of the batter for cupcakes, fill liners 2/3 of the way full with the batter and bake at 350 degrees for 20 minutes. Allow to cool completely on wire racks. Then ice with Joy's cinnamon cream cheese icing!

Are you a pumpkin baked goods fanatic during the fall/holidays?? Obviously I am!
Posted by Mandi at 10:12 PM

They look Ah-mazing!! Your coworkers are going to LOVE you! The frosting looks so pretty. Great work gfriend. And IMO- you can never have enough pumpkin!

The frosted cupcakes are so cute!

can't believe i haven't gotten my pumpkin on yet. what's wrong with me?!?

I am planning a pumpkin fondue, and my favorite pumpkin muffins.
Your pumpkin goodies look so delicious!

Im not.
I AM a pumpkin everythang PURCHASER.
I leave the baking to you.

Gosh, I had no idea you were such a fantastic baker just like your co-piolt! You two are going to be dangerous together. ;)

I love the way you frosted those cupcakes. Looks so professional! Absolutely adorable :).

There's always time for pumpkin, right? ;) Everything looks fantastic, I especially love the looks of those frosted ones!

oh! the muffins or cupcakes look so yummy! i think they would be great to bring to a halloween party! of which i miiiiight just do that :) thanks for sharing!

I wish I were at home now so I could bust out my can of pumpkin!!! YUM!

You are making me so hungry now!! Looks amazing :)

Gorgeous cupcakes! I bet they taste as awesome as they look too!

yum yum and more yum!!! what tool did you use for your icing??? seriously let me know.

you know what would be fun - to try and make the cupcakes and put a cream cheese or cinnamony custardy surprise in the middle!! double whammy!

That cinnamon cream cheese icing is probably the best icing recipe I've tried. It was the perfect consistency and held its shape PERFECTLY! And had a slight hint of cinnamon...just the right amount! Julie, that would be a great idea to bring to a Halloween party! I'm not sure if you can see, but I used some super cute Halloween cupcake liners I found at a kitchen shop - the orange sugar matched the liners and made it all come together!

yeah that icing is really good. i am making pumpkin pancakes tomorrow and how i would love to top them with that icing. but then i would be in a sugar coma for a few hours LOL

Baked pumpkin goodies are the best hands down! Especially the way they smell fresh out of the oven!