Boring (?) Salads and my review on Tina's Bars

Tonight I taught Turbo and it was hot hot hot in the group fitness room! Afterwards, I was taking my time going through some things at home (learning a new release of Turbo, painting my toes in prep for a wedding we're going to this weekend, etc)....I thought I had lots of time because Josh had a softball game and had plans to go to dinner with the guys. Then, Josh called and said he was coming home because he had to help carry one of their players who got hurt up to his apartment! It didn't make much sense for him to go back out after that (the guy lives just down the road) to go to dinner with the other guys and he was on his way home! I threw together some quick salads with lettuce (romaine for me, spinach for Josh), edamame and corn (boiled up on the stovetop..mmmm mmm), tomatoes, walnuts, and homemade croutons (and Josh had hard boiled egg whites and chicken on his). It turned out to be a great/quick dinner. My salad: 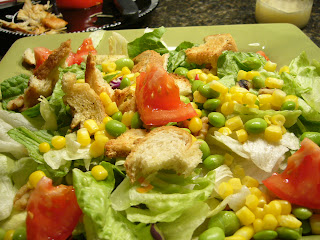 Lots of people have been asking me about the Tina bar recipe so I figure I'd just post up here and say they are chewy and delicious! Like I noted, I used walnuts instead of rasins and I love love them! I had one as a snack when I came home from work and it carried me beyond my work out! Yayy to Tina for this great recipe- try your own variations too!

What is your favorite baked good? Any good recipes to pass along?
Posted by Erica at 10:04 PM

That salad doesn't look boring to me!!

My favorite recipe is the lower fat banana bread recipe from Veganomicon - I use it allll the time :0)

i made it today.
it's fab!
http://twinksy.wordpress.com

the salad looks awesome. i've never thought to put edamame on mine, but I adore them so I really should try it! I don't like cold/hot contrasts in my salads though...so I'd probably have to boil them and then let them cool down in the fridge or something.

Gliding- Yah, I hear ya...the hot cold thing can get a bit weird! But the edamame and corn on the salad is delightful!

that salad is NOT boring :D

of course you can add my blog to your list of favorites :D thanks!

that salad is anything but boring- it's beautiful!!!
my favorite baked good is my mom's "grammies"-- they're kind of like magic cookie bars with graham crust, chocolate chips and coconut... not healthy at all, but AMAZING

I would say that salad looks LIVELY! But then I might come off as a nerd...

My opinion is that salads CAN'T be boring! Love em! But why didn't yours have protein like Josh's? I had a similar dinner last night (like Josh's, with the eggwhites and chickie).

Thanks for stopping by my site!

Fitnessista-Grammies sound awesome! I need to find a recipe!

Twinsky- I love salads as well! I think my favorite kind of salad is greek without olives. Kinda plain but so delicious!! My salad did have protein- edamame! and lots of it! Josh requires quite a bit more protein than I do (hes 6'3"), so I usually try to load him up!

I hate the olives on greek salad too...funny thing cause I looooves me some salt! That makes sense about Josh. I was a vegetarian/vegan for eleven years, and am no longer. A salad with Edamame just wouldn't do it for me these days...doesn't matter how many little green guys I piled on.