Ahhh Monday. Today turned out to be kind of slow. I tried to maintain a positive attitude and took a break at lunch to go to Starbucks for a Skim Misto which did turn my day around (thanks ‘bucks).

After work, I quickly buzzed home and went for a run. Nothing like exercise therapy. Plus I made it to 6.7 miles today- felt awesome! I then quickly went through the Body Attack tracks I’m teaching tomorrow. I got showered and started on dinner.

I made Josh Steak in the following marinade that I originally posted about here:

Mix ingredients. Let steak sit in marinade for ~ 4 hours. Cook under the broiler or on aluminum foil on the grill (looks a little crispy but it was actually cooked just to Josh's liking!!). 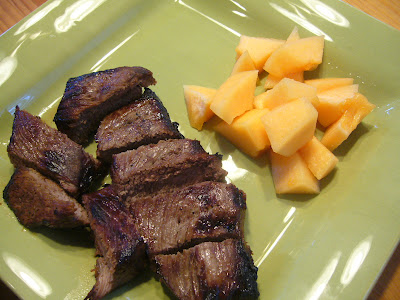 I also made him a baked potato: 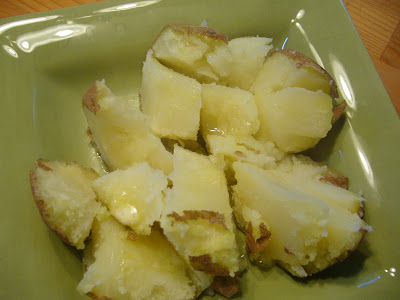 The baked potato was a substitute for the yucca I made tonight. Has anyone ever tried making yucca? I removed the skin, boiled it until tender, removed the woody core, and then baked it up. The result? YUCK! Maybe its an acquired taste. I was sort of bummed, as I was hoping it would make up a good chunk of my din din. Instead, I ended up with a salad of romaine and spinach topped with oven grilled veggies (peppers, onion, tomatoes, white beans and a little bit of olive oil and chili powder baked in aluminum foil in the oven). 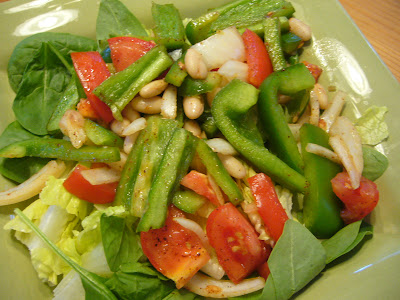 On the side I had a large quantity of cantaloupe and nut butter ;).
What are you looking forward to this week?
Posted by Erica at 7:42 PM

Never had a yuca, but no I'm scared to try it. Although I've seen people make yuca fries, maybe try that?

You can make yucca "fries" by baking them in spears; otherwise yeah, they're really bland.

This week I'm looking forward to progressing to Level 2 on the 30-Day Shred! God help me!

You boiled it and then baked it?

I LOVE Yucca. I love it boiled, fried, baked and steamed. I guess it is an aquired taste because it's one of my favorites.

I'm sorry you did not like the yucca. I think they are better fried!

I've never tried yucca but I'm really curious about it.
This week I'm looking forward to my parent's visit on Friday.

AWww bummer on the less than par yucca. You know, I wasn't in love with it either. I didn't mind it eaten in the "fry" form with lots of ketchup but I realized I much rather perfer BN Squash or Sweet Potato Fries. I'm glad I tried it but I don't think I would buy it again.

who doesnt get a case of the mondays? just think, tomorrow is tuesday! haha..hope the rest of your evening is going well! :)

I've never tried yucca and to be honest, I'm afraid to! I should prob give it a chance, though...

This may sound odd, but I'm looking forward to taking my daughter back to school clothes shopping later in the week! ;)

Sorry you had a case of the Mondays :-(

Ari would be so happy if I made him steak! I've been promising for a while... how do you make it for Josh without tasting it first?

This is sappy, but I'm looking forward to Ari coming home from tour! His album is also coming out TOMORROW which has been a long time coming... VERY exciting!!!

I've never tried yucca, but I've seen other bloggers like it. To be quite honest - the looks alone scare me - I don't think I'd be able to try it!

Haha cute title. I've only had yucca here in our dining hall...not sure how they cooked it but it was yummy...not yucky :)

I just got in from a run and finished lifting weights! Feeling good:) Now I need to find dinner, watermelon is calling my name! I am already looking forward to Friday:)

I had myself a nice portion of cantaloupe tonight too ; )

I haven't ever had yuca but I'm glad to know it "yucy" beforehand, ha.

sorry about the yucca! try baking it next time at around 400* for 40 min- flipping halfway. season with evoo, sea salt and garlic-- they totally taste like potato fries
hope you have a great night!

I deep fat fry my yucca root to make chips and they are amazing - that's the only way I've made them so I am no help!

Sorry they sucked for you!

i had yuca at a cuban restaurant and it was fantastic - but ive never cooked it so i can't help ya with that one :)

work out that work out girl! woowoo!

Never tried it but heard yuca fries were pretty good?? Now you have me all curious! What am I looking forward to this week (??): goin on a cruise to the Bahamas for our 1 year anniversary!! :) :)

I've only had yuca in the form of fries...and they were pretty tasty! Definitely tougher than potatoes, but okay in my book. Sorry they didn't turn out...at least you can say you tried it!!

I've been wondering about Yucca. I see some bloggers making fries out of it, looks good but I'm weary of it! lol Can you compare it to something...the taste?!

Sorry the yucca didn't work out for you, I definitely think it is an acquired taste.

Never had yuca...sorry it was yucky :( This week I'm looking forward to...the weekend? Ha, kind of pathetic, but true...

surprisingly Im NOT looking forward to my parents leaving town after 2 weeks here.

This week I am looking forward to my "date night" with the hubby. We are going out to dinner then hitting up the mall for new workout clothes/sneakers for me and then Lowe's for a new rug for the living room.

I wasn't a huge fan of the yucca when I made it either. It was such a pain to peel and then it kinda tasted like chlorine. Random. Once I baked it it just ended up tasting like a regular 'ole potato. Perhaps Meghann has some tips, since it always looks delicious when she makes it!

Maybe that's where the word 'Yuck' comes from?! Sorry it was gross...live and learn, eh? I've never had it though have heard the fries are pretty good.

I'm looking forward to going away this upcoming weekend with my hubby! We are going to see James Taylor play at Tanglewood in the Berkshires of MA. Cannot wait!

I haven't tried yucca--it WAS on my list of things to try, but maybe I will scratch it off. ha ha. Maybe in some sort of recipe it would be better?

Ooo. That steak looks delectable. I'm gonna do that marinade. Haven't had steak in awhile so I'm ready! What cut of steak did you use?

(I see you, Mr. Cantaloupe Cubes)

Do you mean cassava root when you say yucca?

I like the steak marinade....I really love these kinds of flavours yum!

Never tried yuca, but have been seeing it a lot around blogland. Sorry your's didn't work out...looks like you are getting some good tips in the comments section though!

I am looking forward to Top Chef tomorrow night!!!!

Ah cassava! He has it mashed then adds it to pan fried onions and curry spices etc.

Also we can get bags of cassava chips.

I never tried yuca, but I have seen it all over blogland lately. Sorry your's didn't work out but it looks like you are getting some good tips!

I am looking forward to Top Chef tomorrow!!!!

I haven't had a baked potato in so long - yum!! Sorry the yucca was yucca :(

As crazy as this sounds, I'm looking forward to starting classes NEXT week. I've had enough vaca, I need some structure!

Hope your Tuesday is better than Monday!

hmmm never had yucca but you are so brave for trying it! I am such a wimp sometimes when it comes to trying new things! have a fabulous week!

Yucky yucca? Drag. I had yucca fries at a latin american restaurant once and loved them - they were a little lighter than potato fries. But then again, if you fry something, it's probably going to taste pretty decent!

sorry about the yucca! i've had it and loved it, but I've never tried making it myself.

i'm looking forward to a few good runs (hoping for good weather!) and a fun last weekend before football season!!!

haha. i liked yucca but it was a mash from a restaurant so ?...

Love the "large quantity of cantaloupe and nut butter". :)

i've never tried yucca either, i don't even think i really know what it is lol! everything looks so good, great job on the running!

I've been curious about making yuca fries - been wanting to for ages...will report back!

I've never had a yucca but have recently been looking for one to try it out. Thanks for the heads up. If I make it I won't "plan it" for part of a meal the first time.

I have never tried a yucca before. Now, I am kinda scared to.. hehe

I've never had yucca before..

Yucca is called Mandioca here in southern Brazil or at least in Parana. It is really popular and like others have mentioned my favorite way to have it is fried. It's a big beer drinking snack where we are living. I've had it steamed too, but it is an acquired texture due to it's woodiness and the strings. It is better if you put it through a potato ricer or strainer when it is steamed or mashed.

I've got lots of travel research to do this week so I'm really looking forward to it! Hope yours is going well!

I adore fried yucca! I used to work in a Cuban restaurant and they served it with a garlic dipping sauce. Delicious!

i made yuca chips once that i liked, but haven't tried mashing it like taters...

I like yucca (it's the same as tapioca, right?) chips. Haven't tasted them in any other form.