Hello! Lots to cover, so I'm going to get right to it! The rest of my day was great, I practiced body attack, ran out to look for a few things for my sisters baby shower, and did a lot of cooking!

In case you haven't heard me say it before, Two Peas and Their Pod is one of my favorite blogs! Maria and Josh are always cooking/baking up something amazing. I keep encouraging them to open a restaurant!! Any who, they recently posted about their adventures with making Gnocchi. You may recall that I have made gnocchi once before, but I did it using forks to mash the potatoes because I didn't have one of these babies: 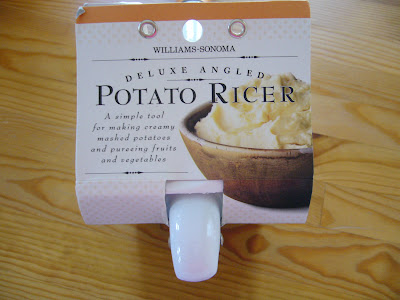 Yes! I used my new ricer to prep my gnocchi tonight and freeze it so it can be eaten later in the week. I used Maria and Josh's recipe that you can find here.

Potatoes after going through ricer: 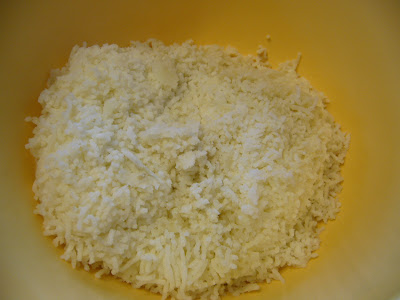 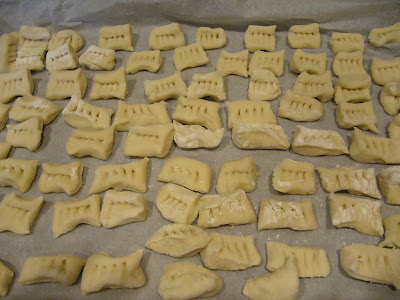 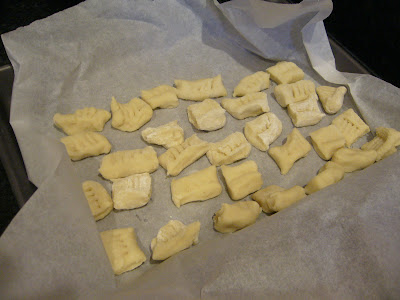 Thank you Maria and Josh! I cannot wait to eat this later in the week.
For dinner tonight I made some fiestaflower mash: 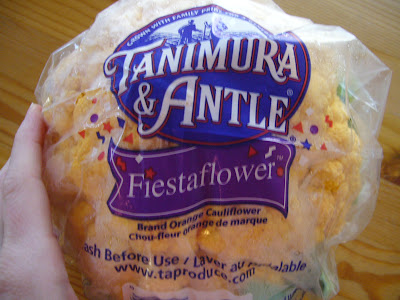 I have seen colored cauliflower on K's blog and have been interested in making it ever since. The Taproduce website notes the following about fiestaflower:
"Fiestaflower™ has 25 times more vitamin A than white cauliflower and contains so much beta-carotene it actually causes the cauliflower to take on the orange color. Orange cauliflower contains approximately 320 micrograms of beta-carotene per 100 grams making it much more nutritious than the traditional white cauliflower."
I took my fiestaflower and boiled it up until soft, I then drained the pot and added in 1 tablespoon smart balance, a little bit of cheddar cheese and some milk and mashed it all up. I had my caulimash with a big salad and Josh enjoyed some steak (which accidentally got a little well done since neither of us was paying close attention ;) : 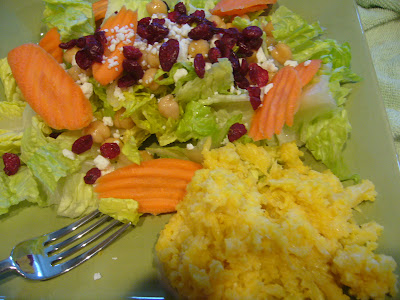 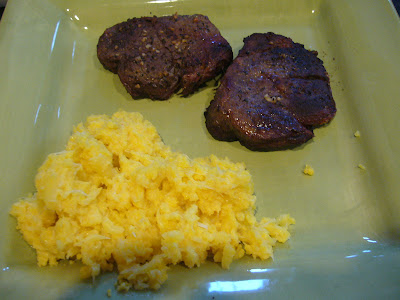 I'm off to go through the bills and our files with Josh (fun, fun!). What are you up to tonight?
Posted by Erica at 7:07 PM

Your gnocci looks awesome! I have seen it prepackaged in the store before, but have never tried making it!

Erik and I are going to watch a movie tonight : ) (though I don't know which one yet, he picked it out and won't tell me, haha)

Have a good night (even though you're going through bills and files;)

The gnocchi look great! I have been thinking about doing another gnocchi soon. I just got back from a wonderful day at the farmers market so now I am going to get to cooking!

YAY for colored cauli!! I love your mash idea, I may have to try that out with my purple cauliflower :)

I'm also glad to know that I'm not the only one who thoroughly appreciates the cinematic classics such as Eurotrip!

My night sounds about as fun as yours, studying for Chem - bahhh!!

PS. Thanks for the shout out ;)

yum! that fiestamash sounds delicious! and the gnocchi looks so, so tasty, too :) mmmm.

Sounds like a wild and crazy night for you two!

Yoga and then bed...hopefully I sleep because our house is sooo hot!

looking good those gnoccis! can u freeze it? I never thought that you could, I always thought that they must be fresh! So good to know! :D

That gnocchi looks fantastic! :) I had no idea about the difference in nutritional values for the colored cauliflower - good to know!

I'm so impressed that you made your own gnocci! I L-O-V-E gnocci, and yours is fabulously photogenic.

I'm off to do HOMEWORK! But I'll probably end up watching a movie, too. All work and no play makes me a dull girl!

I love Gnocchi! Making it at home is so much fun.

your gnocchi look fantastic!! and i just got a ricer too, so now i need to use it :)

Never tried gnocchi! I admire that you try, eat and make a variety of new foods.

Tonight was all about watching "The City" online, because I don't have cable!

erica you are SUCH a foxy fiend in the kitchen!! I am so impressed, oh..and I just remembered how GORGEOUS your new kitch is, so now I can see why!! :D Have fun with bills blaahhh hopefully it goes fast!

wow, im so impressed with that gnocci!

Yikes! Look at you, going professional! I am so impressed with your homemade pasta skills!
That cauliflower looks fabulous as well.

That looks wonderful! I remember reading in my Julia Child cookbooks how much she loves a potato ricer. :) You make the best food Erica! I love that mash too!

that is all (oooh except it isnt ;) are you pondering submitting a recipe to MizMag??)

That gnocci looks absolutely amazing!! YUM. The hard part for me would be not eating it that night - I would want to tear it up. :-)

That gnocchi is amazing! I've never heard of a "ricer" before, but it sounds great. I'll have to check out Two Peas and Their Pod, too!

Fiestaflower is so pretty! I love the mash. I've never seen it in a store before but I bet it's because I haven't been keeping my eyes open ;o)

Hope you have a great week ahead, Erica! I wanted to thank you for the advice you gave me from Josh's dad! We can definitely lean on each other :o)

I definitely need to get a potato ricer. I haven't made gnocchi in forever. I think that would really help with the process. Hope you have a great week!

Thanks for the kind words, love you too:) Glad you tried the gnocchi. We loved making it and eating it:) We put some in our freezer, it is nice to have on hand!

Oh a ricer! I use mine to make mashed potatoes. Love it!

I am so impressed by your gnocchi! That's one thing I have yet to tackle. Can't wait to see how yours turn out! :)

I have a long neglected ricer in the cabinet. I should get it out and make some gnocchi. Yours look amazing!

I want to make gnocchi. You make it
sound super easy...but I have a feeling I'd mess it up. Mmm. But it looks delish!

i have never tr5ied gnocci but i bought some premade at trader joes. i should use it soon! your homemade ones look perfecto!

Hey! I just saw your comment on the other post.. I teach RPM, and start training for Flow in a few weeks. I'd love to teach Attack, and we're trying to get a training here soon. Your Gnocchi look great! I've been trying to work up the nerve to make them, maybe now I'll give it a try :).

Your gnocci look so cute! Congrats on making them from scratch, I haven't attempted that yet!

I am so impressed with your gnocci making skills!

Everything looks yummy, especially that cheesy cauliflower. I am obsessed with Smart Balance. Love me some buttery goodness!

I love that gnocci!! oh my goodness, they are such cute little packages! what a talent you are!

I have totally heard of these new "hybrid" veggies. I think its great to try them but I think the hype is over nothing- you can get plenty of carotenoids in carrots, tomatoes and sweet potatoes and peppers- without the fortifying.

Still- it looks pretty cool- esp. how you mashed with cheese- genius! :)