E: The Other Guys…

On the blog, I usually highlight two or three meals or baked goods that I make each week. Of course, there are those other nights, where I still cook meals that I think are yummy, but they’ve either appeared on the blog before or I don’t consider them “blog worthy”. I figured I’d highlight those other guys in this post…

1) On Tuesday night, I made up a batch of shrimp stir fry of sorts. I used the sauce from Esi’s Chipotle-Lime recipe. I ate my shrimp and veggies as is. Josh had his on top of wild rice from TJs. Both bowls were topped with sesame seeds: 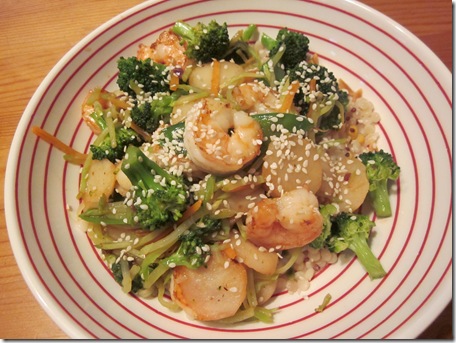 2) On Wednesday night, I went for shrimp again (yes, I’m still in a shrimp craving pregnancy stage ;)). This time, I made up shrimpy spinach salads. Since it was a snacky afternoon, my salad was a little on the lighter side and contained spinach, broccoli slaw, tortilla strips baked up in the oven, apple & shrimp. The salad was topped with olive oil & vinegar: 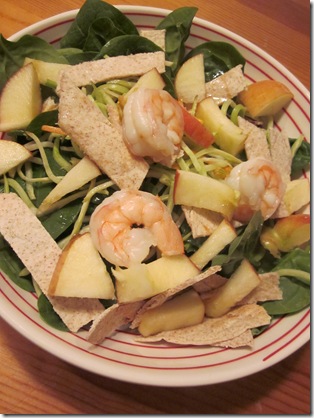 3) Thursday night, I made a half batch of a blog worthy meal, Shannon’s pumpkin & black bean enchiladas. I was a littttttle nervous to make this because Josh just started to enjoy eating pumpkin (mostly in baked goods form). The result: 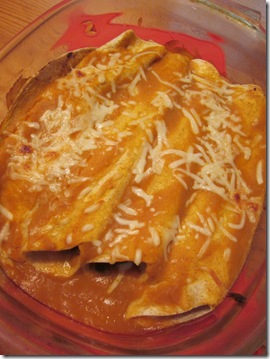 Josh had his enchiladas as is and I tossed mine on top of a spinach & broccoli slaw salad. I thought they were good- they have a HUGE kick and a totally unique flavor. Josh gave them a medium rating. I think he's just not ready for savory pumpkin yet ;) 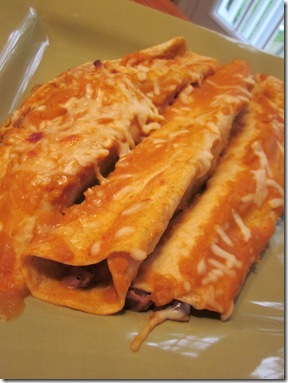 And last but not least, on a funny note…I had to go into work for a meeting on Wednesday. I work from home full time and rarely go into the office. I realized, as I was getting ready, that I have no maternity work clothes (which is becoming an issue with pants), YIKES! I threw together some normal clothes and just put on a bellaband. I took a few pictures before hand to make sure I didn’t look too ridiculous ;) 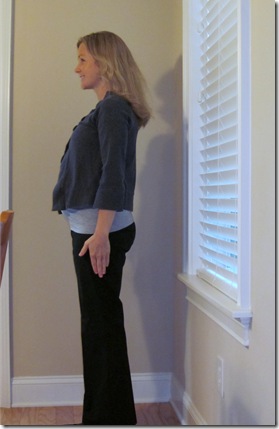 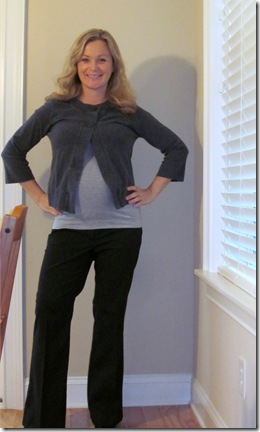 Note to self: buy some maternity work clothes ;)

What are you up to this weekend? We’re having dinner with my parents on Saturday night and brunch with friends Sunday morning. Other than that- taking Body Step Saturday AM, cleaning a bit and ??

At least you are getting your protein with all the shrimp. Is shellfish a safe source for pregnancy? That's so good to know because I don't know how I would be able to live without shrimp and crab when I get preggers.

You TOTALLY pulled off the work maternity clothes!! You look so adorable. :)

You look so wonderful! Gorgeous!

Now I'M craving shrimp, too!
Hope you have a great weekend- I'm doing some hiking tomorrow so that should be fun!

I think all of your meals look delicious! Ha, and you did a great job coming up with work clothes, you're looking so cute!

I haven't had shrimp in months! But I also haven't been pregnant in... ever. :P

you are officially showing! CONGRATS!!!

Great eats but they are overshadowed by how adorable you look!

Shrimp makes me happy. Yum!
And you are officially the cutest pregnant lady EVER. SO CUTE!!!
Tonight we are having dinner at a new blogger friends house, tomorrow dinner with my best friend, and Sunday is Team Challenge. Busy, but fun weekend. :)

You look wonderful!!!!! So gorgeous!

Hope you have a great weekend!

I have some shrimp in the freezer...I may have to pull it out and make tonight! These dishes look great!

And you look fabulous! You are absolutely glowing!

i think the other guys are just fantastic!I love anything with chiptole and lime! You look adorable and if only we lived close because your my size and I have one gazillon bags of work clothes for when I was prego!

Loving those enchiladas. I love the combo of black beans and either pumpkin, sweet potatoes, or kabocha or butternut squash. YUM And you look so cute by the way. You really look happy!

You look so great! In that first picture I could barely tell you were pregnant. Those enchiladas sound so good, I wonder if sweet potato would be as good as the pumpkin?

haha...Erica, you could not look ridiculous if you tried...you are simply beautiful and that will never change! :)

shrimp would have totally grossed me out when I was pregnant...lol

Mmm...shrimp. I can't wait to get some that is actually LOCAL! The enchilada's look yummy. I would have never thought to try pumpkin.

You can't even tell your clothes are "regular" clothes, but the question is...how did you feel in them?

This weekend is packed with projects, papers, & Body Pump! :)

you look adorable, as usual :)

yum I love shrimp! I think you have inspired me to buy some at the grocery this weekend. My plan is to stay away from downtown on saturday morning!! say no to bridge run traffic!

I think those dinners are totally blog worthy! Pumpkin enchiladas sound awesome. You look wonderful and totally professional for not having any maternity work clothes!! I can't believe how much you seem to change from one picture to the next - so incredible :)

Awww you look so adorable!! I've been craving shrimp so much lately too... But I'm not pregnant :)

shrimp and spinach is the best combo EVA

the bigger your bump gets, the cuter it gets!

You look great!!! Just buy one pair of pants for work though, since you don't need them often.

You look so cute in your work gear. You are the CUTEST pregnant girl in the WORLD.

do you like the bellaband? I never had one but wish I had now. they look great! love your outfit!! your shrimp dishes look sooo yummy!!

Lauren- YES! You can have shellfish :)

Jenna- LOVE the bellabands- such a great idea

I have been craving enchilada I think I'm going to have to make them in the coming week.

This post is making me crave shrimp! It looks so delish. :)

My boyfriend isn't into pumpkin, sweet potato, or black beans. It makes cooking for him a lot less fun!!
You look great btw!

love all the shrimp dishes, YUM! you look so adorable, and i love the outfit you're wearing!

you wouldn't have known that wasn't work attire :) you look great!! thanks for the shout-out, sorry josh wasn't a huge fan! i'm sure he'll come around :) or perhaps try it with sweet potato or squash if he likes either of those??

ooh those meals look great! I bet your coworkers loved seeing you and the baby! :)

I've been loving shrimp in my meals lately too--such a versatile ingredient!

ahhh you are so super cute! the pumpkin enchiladas sound so good! girl I LOVE savory pumpkin!!!! =) need to try it for sure!

ahhh your work outfit is great!!! i bet the people at the office who never see you were so happy to see you pregnant!! they better have showered you with baby gifts and love haha

you and me must be drinking the same shrimp kick juice! i've been a shrimp whore lately and just had a huge shrimp salad at a restaurant tonight with goat cheese and other goodness and it was amaze! but i love tha tyou added apple on yours! i've got some pears in the hosue that i bet would be delicious too!

Kudos to you on pulling together a work appropriate look with regular clothes!

No big plans for the weekend. I'm teaching aerobics in the morning, then doing a little shopping with M and Joycie. My SIL is suggesting a double date tomorrow night, but nothing definite yet.

You look so CUTE in your work outfit! How far along are you? I hope you have fun shopping for some work clothes! I wished I worked from home on most days! Oh and BTW, your enchiladas look so tasty! I'm now craving Mexican food!

I think those dinners are blog worthy!

You look cute in your outfit!

The enchiladas sound good to me:) I haven't had to buy any maternity clothes yet, but I probably should look into a bellaband soon! Glad you like them!

I hope you are having a wonderful weekend hun!! You are just glowing in your baby bump pics :)

Those pumpkin enchiladas look amazing and so yummy! Congrats on being pregnant. :) This is my first time to visit your blog. :)