I did it! I officially completed all 10 of Rachael Ray’s top 10 recipes of 2010 =) This last recipe, Asian Pepper Steak, was saved until last because, well…I can’t exactly eat it! I’ve mentioned before I’m slightly allergic to beef, so while I could taste, I couldn’t completely partake in an entire plate of goodness. But I did whip up a pretty darn good taco salad for myself =)

But let me tell you, even though I couldn’t eat a lot of this, I did taste and this might seriously have been my favorite of all 10 of the dishes. It was definitely the hubs’ favorite.

The salty/sweet combination of the soy sauce, tomato sauce, and brown sugar was outstanding. And the sliced peppers added the perfect fresh crunch do the dish. I really can’t rave about this meal enough! Serve up with rice and it’s complete! 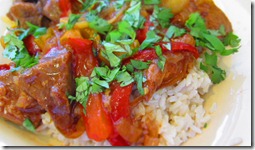 The biggest changes I made were I cut the recipe in half since it was mainly for the hubs, and instead of browning a slab of flank steak and slicing it, I just got the packaged stew sirloin meat to make the prep time a little shorter. I also only added the cilantro for the topping because that’s what I had on hand. 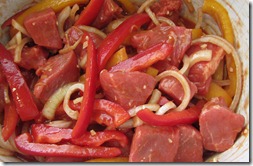 In a large skillet, sear the meat in some olive oil until brown on both sides. Remove the steak to a cutting board and slice the steak into 1-inch thick strips. (Again, I nixed this step and just added in stew sirloin meat to the crockpot)

Place the sliced steak into the crock-pot, then dust the meat with cornstarch and mix until there is no more visible cornstarch.

When you are ready to serve, get a medium bowl, mix the topper ingredients and place a portion of the mixture on top of each portion of Asian Pepper Steak. (Again, I only added the cilantro, but it really did add the perfect burst of freshness to the dish)

Serve on top of cooked rice. 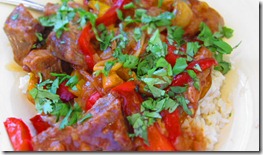