It looks like everyone had some awesome Thanksgiving holidays =) What could be better than spending time with your fam and eating? I had a pretty good one myself. Although I have really missed blogging while I’ve been out of town the last two weeks! Of course, the wonderful miss Erica has been holding down the fort all by herself! I've had a lot going on back at home in Virginia so we have been back twice…count em…twice, in the last two weeks! Whew! That’s a lot of traveling!

But man, did I miss my mama’s cooking! I think everyone has their own little special dishes they make with Thanksgiving dinners; my mom’s is broccoli coleslaw, pea salad, and usually some kind of fruit jello salad – this year it was blueberry. And lastly, of course, about 3 different desserts. I tell ya, I get it honest.

My Granny, who is 92 (FYI, she is the coolest chick I know…and where I think all the women in my family got their cooking skills from!) 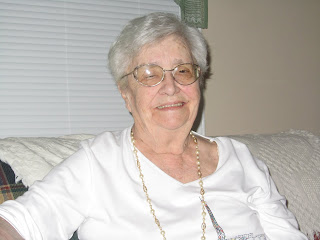 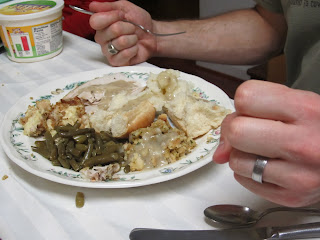 Me scarfing down on some stuffing 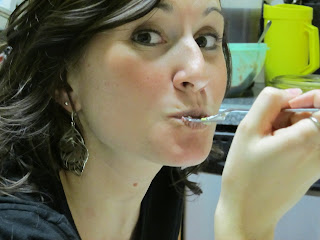 And just because I feel like sharing, a very cool billboard we saw on the way into town (note: I did go to VA Tech, and also got married on campus, so I have mad love for my alma mater =)) 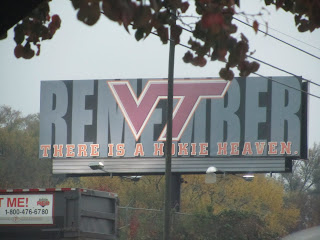 Gotta love Thanksgiving! And speaking of super awesome food, I also must share with you this amazing banana cookie recipe I got from my sis. 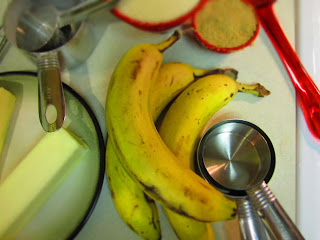 When we were home last week, my sis had a huge batch of these made up and we could not stop eating them. They are SO tasty, light and cake like, moist, and packed with lots of banana goodness. 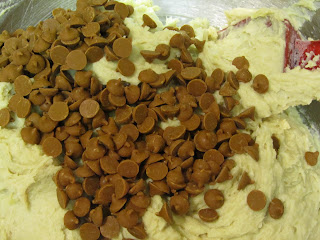 I wanted to make mine a little different and added cinnamon chips. Let me tell you, this addition was PERFECT. The whole cinnamon and banana combo is so good. Granted, I can eat anything with cinnamon in it though! LOL 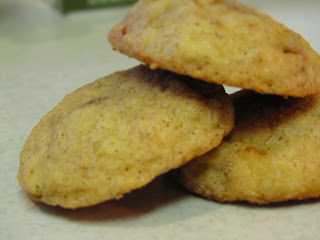 I think these would be perfect to bring to a holiday party or for a group of little ones…they seem to be a real crowd pleaser, and as long as you like bananas, you’ll like this babies!

2 ¾ cup all purpose flour, (sifted if you want a lighter crumb)

In a large bowl, mix the butter, 1 cup sugar, and brown sugar with an electric mixer until light and fluffy. Add egg and mix until combined.

In a medium bowl, combine flour, baking soda, and salt.

Mix the dry mixture into the wet until just combined. Add the cinnamon chips and mix well. Let the dough chill for about an hour so it can be easily shaped. This dough is pretty gooey!

In a small bowl, mix the remaining sugar and cinnamon. Form the dough into 1 inch balls and lightly roll in the cinnamon/sugar mixture. Place onto an ungreased cookie sheet. Bake for 9-10 minutes. 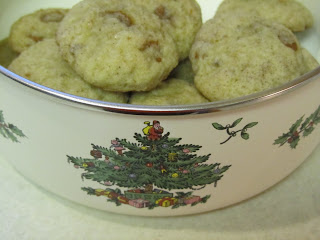 P.S. how cute are the pups in front of the Christmas tree? Also, the black lab may be a little like Where’s Waldo…he sort of disappears into the chocolate blanket he’s laying on LOL 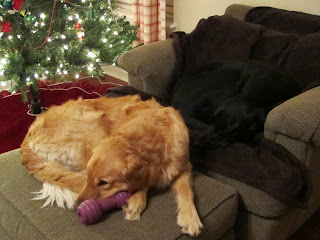 I love banana and chocolate together. Add a little peanut butter and I'm in heaven!

I love cinnamon and banana together!!! Reminds me of bananas foster, yum.

Your grandma is so cute!!

I didn't know you were from VA, represent!! My little sister is a senior at VTech right now... I went to JMU though :)

These cookies sound so good!!!! I don't think I've ever seen cinnamon chips though? I'll have to be on the lookout!

Sooo glad you had a great holiday! The food sounds great, and those cookies would be right up my alley since I love all things banana and cinnamon!

Those look great!!! I don't think of banana cookies that often, but I bet they rock!

These cookies look sooo good! :) I wish I could get cinnamon chips where I live (they only sell chocolate chips around Christmas and Easter, and any other chips are unheard of).

How great to have your grandma there!

Banana, chocolate, cinnamon (and peanut butter) are a combo I try to enjoy daily :).

the cookies look delish! glad you guys had fun! we missed you in this part of VA, though!

Your grandmother DOES look like one cool chick. My grandpa just turned 90, and he's also one of the coolest guys I know.

Yummy!!! Those cookies look great! One question though, where do you buy the cinnamon chips????

now THOSE cookies look and sound fabulous!!! 92 and still rockin it! Love that ! :)

Oh my gosh! I have 3 dead bananas sitting in my fruit bowl and I was planning on making banana bread b/c my baby is insane for it, but I think she (and, um, I) would love these!

Although I've never heard of cinnamon chips. And now I saw the other comment about peanut butter...and well, these are going to be some insane cookies. Awesome!

I love bananas and I love cinnamon chips. These look fantastic...yum!