Hello out there! How are you? How has the weekend been? The end of this week was totally hectic for me work-wise and the begging of next week plans to be much the same. The good news is that I will have a week off due to large amount of overtime I’ve been rocking and I am planning a nice staycation starting Wednesday of this upcoming week!

I did want to share with you a new product I tried out courtesy of Food Buzz and Kellogg's (disclaimer: I received this product for free), Fiber Plus Antioxidants Cinnamon Oat Crunch: 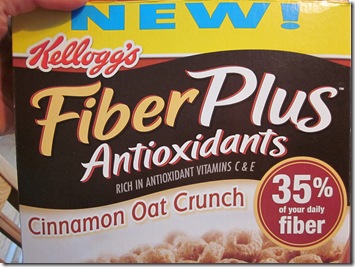 Lindsay and I had a talk about how yummy this cereal is and how much it reminds us of Cinnamon Toast Crunch. I mostly enjoyed it mixed into protein shakes: 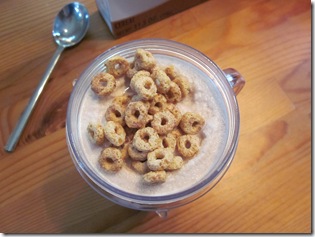 I don’t usually eat too much cereal as a lot of it is seriously over processed. My other issue with this cereal in particular is that sugar is the second ingredient (which is probably why it tastes so much like Cinnamon Toast Crunch ;)).  Yikes- but as Cookie Monster says, this cereal is a sometimes food.

Tonight, we headed up to my parents for dinner since my sister is in town. I brought along a very easy appetizer of cheese, TJs sesame covered cashews, Nature’s Promise Organic Crackers (Sunflower Basil and Poppy Thyme), South Carolina peaches & strawberries and hummus: 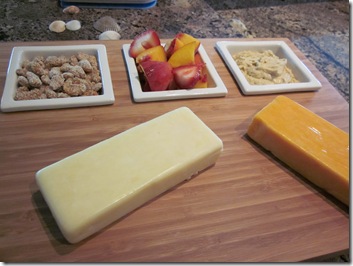 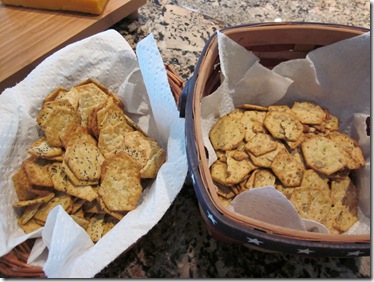 Fantastic! The crew had Steak for dinner: 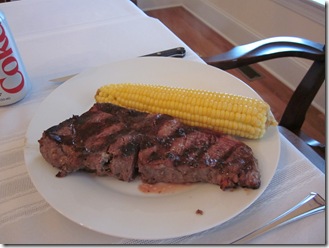 and I had a black bean burger with corn on the cob(x2), 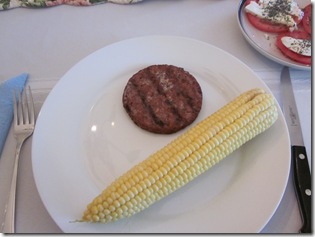 and mozzarella and tomato salad: 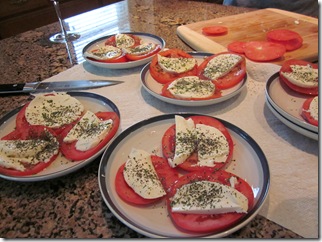 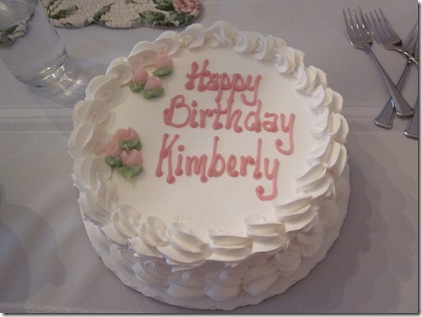 Deliciousness! VERY light icing and the cake was super moist (I hate that word).  Me & The man: 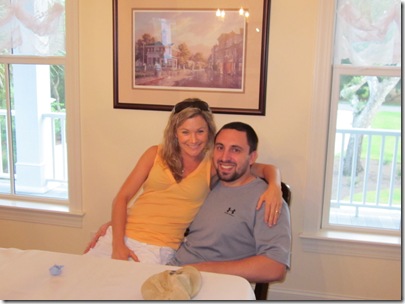 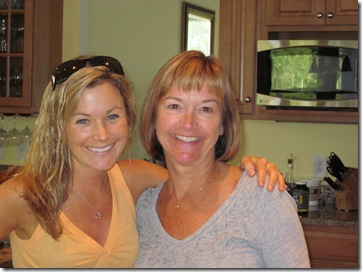 What are you up to Sunday? We are headed into Charleston for lunch/brunch with my Parents & Sister, Brother in-law and niece. Other than that. I want to relaxxxxxx and prepare for two days of craziness before staycation time.

I love that word staycation. I think everyone needs time. That is exactly what I am doing tomorrow. Doing whatever I want, me time. Have a great time with the family.

Haha, love how so many people hate the word moist! But it explains perfect cake in such a good way! Oh and speaking of cereals that taste like childhood classics: Kashi GoLean Crisp (I think that's its name. it's like golean crunch but with dried berries) tastes EXACTLY like Trix! But, Kashi is kinda in love with organic brown rice syrup, and the berries mixed in there just reminded me of trix cereal.

Have an amazing weekend!

What a great app idea, Erica! And a staycation! That'll be great. Have a great rest of the weekend!!

Ooh anything that tastes like cinnamon toast crunch sounds good to me!! Enjoy your brunch tomorrow :)

YAY for time off!! : ) And staycations are wonderful, aren't they?

I absolutely love mozzarella and tomatoes, especially in the heat of summer ... ahh.

Have an awesome staycation!

yesssss STAYCATION!!!!!!!! you better GTL it up girl well just minus the laundry part

hahahaha i seriously died laughing when you quoted cookie monster. hahahaha and i love that you and lindsey had a discussion about the cereal. so awesome hahaha

i couldnt be anymore pumped for you and your staycation. espesh with you working such crazy hours. sunday brunch is the perfect way to conclude a crazy week and you better parfait it up!

i'm just at my summer cottage right now and tomorrow will be a day of nothing, nothing, eating, tanning, boating, nothing & eating. hahahaa enjoy your weekend girl :)

yes, lady, you better relax! i hope you have a wonderful sunday and i'm already jealous of wherever you have brunch :)

i love tomato and mozzarella salad.. with basil and olive oil= my fav salad in the world!!!
have a fun Sunday~~ :)

That cake looks so yummy! Looks like you had a nice time with your family!
Enjoy your Sunday - hope it's nice and relaxing.... :)

I wish I could stay away from cereal but I have to admit, cereal is my food vice! I can not live without it and I often eat way too much of it! I love seeing new cereals pop up on shelves, especially ones with a good amount of fiber. This looks good but reminds me of Kashi H2H. Does it taste similar?
What a great diner with your family. And carrot cake is my FAVORITE! Your sister has good taste. ;)

Enjoy your day. I'm off to an early Body Pump class (which I will be thinking of you!) and then relaxing for the rest of the day. :)

Yayyyyyy staycation!!!! That's awesome to have time off from work!!!!! Feel like taking a trip up to Maryland this weekend? I think I'm going down to see Steve ;) He's in Waldorf. Have you done anything around that area? Happy Birthday to Kim! I hope you guys have a great Sunday!!!! :)

Hahaha I've never had an opinion on the word moist, but now that I think about it it's kinda weird :P Glad you are having a nice weekend!!!

You totally deserve the time off! Let's plan for our date on Friday. I'll shoot you an email. Isn't the word moist awful? Yuck! My parents brought me a bunch of Georgia peaches. They're delicious. Hope the rain isn't ruining your brunch plans. XOXO

What a fun birthday event! I didn't realize moist was on the most hated list? Funny.

I love cereal, but I know I shouldn't:) I never eat it for breakfast though, it is always old fashioned oatmeal for me! Cereal is a snack or treat! Glad you are having a good weekend!

Hey girl!! I can't say that word either-- there is a very short list I have but that word is definitely on it:) Love the tomato mozz salad- makes me want one right now!

Congrats on the staycation!!! Definitely the best part about overtime is time off in return.

And I'm not a big fan of the word 'moist' either. It sounds gross.

I don't tend to eat cereal because I find that it doesn't have any staying power... I'm hungry way before lunch.

I have nominated you for a blogger award... http://campinggirlchronicals.blogspot.com/2010/08/versatile-blogger.html

hi girlie!
aww you and hubs are such a beautiful couple!!
this cereal looks so good...it's so weird to me how fiberplus can CRAM so much fiber into their products!
dinner at your parents looks awesome.
wooohoo for the upcoming staycation! I hope today was full of relaxing!
xoxo!

ooh, corn on the cob! looks like a fab celebration :) i am recovering from vacation... dreading getting back to the real world tomorrow!

I just found your blog today...and I've enjoyed looking at your posts! It sounds like you had a great celebration, and I hope that the rest of your week is just as lovely.

Totally agree with the Cookie Monster. :-) When I was a kid, I used to inhale CTC like it was at the bottom of the food pyramid!

That cake is beautiful! haha and you know I am with you on the "m" word. I always giggle after I say it (reallll mature!).

I'm glad that you have a mini vacation coming up, you deserve it! I'm sad I couldn't make it to Step this week, I was out of town this weekend....but I will be there this week!!! :-)

why do so many people hate the word "moist?" it's pretty funny!

"lactose free carrot cake from the Pawley’s Island Bakery "---omg flashback from the past!!!!!!! pawley's island, and murrell's inlet...girl, you're takin me back to my time in MB!!

beautiful picture of you and your mom! and that cake looks delicious :)

oh i love the tomato mozzerella salad, it's one of my favorite summer salads! i'm going to have to check that cereal out, putting it in a smoothie is a great idea.

hahaha i hate the word moist too! but i *love* the idea of a staycation. i need me one of those like now.

i have never seen that cereal, but if it tastes like cinnamon toast crunch, i will probably love it.

have a great monday girl!!!!

What a great weekend Erica! Glad you had such great family time.

I do have to say your burger looks so sad in comparison to those steaks!

omg your mother is beautiful! looks so much like you!

it really is hilarious that so many people hate that word! i wonder why haha

i totally agree with you about everything you said regarding cereal, BUT once in a while cereal is just SO darn good!!

glad you had a nice weekend!!! xoxox

Staycation sounds really wonderful! I would love some time to just see some of my city! Enjoy every second of it!
Oh and laughed a lot at the size of those steaks versus your black bean burger - what beasts!

Loving that little appetizer tray! Those compartments would be so handy. Where did you get it??

aw happy birthday to your sis - cutie cute cake!! I heart a staycation. I NEED a staycation!! The tomato/mozzarella salad looks AWESOME. Two of my fave foods blended together to amazingness!

What a great foodie weekend!

I am on at the tale end of my staycation. I am not looking forward to going back to work. Enjoy your time off!

I too love the word STAYCATION.

and am now going to sing all day STAYCATION ALLL I EVER WANTED.
STAYCATION HAAAAPPPY TO GIT AWAY :)

Yay for a staycation!! I totally need one of those. Interesting cereal... I love that it has a lot of fiber but too bad about the sugar. I'd probably be eating it for dessert or a fun snack!

Yup, cereal is so often full of sugar, I'm so glad you mentioned this one! It's a case where something that looks healthy really isn't. Nice work.

the cake looks amazing!! I hope you had some nice down time!

aweee i love you and your mama <3 ADORABLE!!

i just bought nature's path Smart Bran so im excited to rip it open and start eating. fibre and cereal- what could be better :)

That cereal sounds so good! I love me some Captain Crunch, haha
I hate the M word too!! I can't even say it - bleh!

Nothing better than steak and cake!

Oooo I love Cinnamon Toast Crunch haha! BUt yeah, totally too sugary! Fun trying new cereals though and if you have a cereal medley you can have like 80% healthy cereal with the sprinkling of sugary on top.
Looks like a great time with your family! Love easy appetizers like that to bring somewhere.

I'm currently enjoying the beach in the Outer Banks! I'm only a state away! :)

Love the appetizer and the board that it's on.

Yay for a staycation - hope you enjoy your time off!

I'm weird and like to mix cereals, usually kashi autumn wheat and cheerios - then I can customize the sweetness :)

With the economy right now, staycation is the best option or a road trip that's not too far.

I don't like sugary cereals. When I do eat them, I like to have them as toppings for crunch instead of eating straight from a bowl with milk.

Lactose free carrot cake... That sounds amazing! I hope you have an awesome staycation. Those can be the best.

My notes to you: I love that cereal. Those blocks of cheese can double as weapons. Ooo, look at that steak! Oh, wait, I see cake.

I hate how cereal is always loaded with sugar--I would rather it have none and add some Truvia to it or something! You and your mom are adoooorable :-)

Mozzarella and tomato is so delicious. That is a well cooked steak!