Thank you (again ;)) for all of the congrats on my race! I woke up a little sore and decided that it might be good to take a yoga class. I had received a free pass to a new Bikram Yoga studio in my race pack so I used it and took an awesome 90 minute class. It was the perfect start to the day.

After class, there was some football and relaxing and then Josh and I ran out to pick some pumpkins: 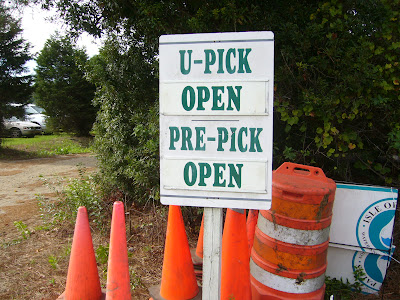 The patch had lots of awesome goodies including barrel pickles: 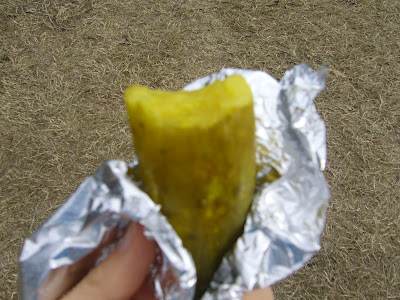 Josh and I also picked up a few mini pumpkins and two larger ones for our door step: 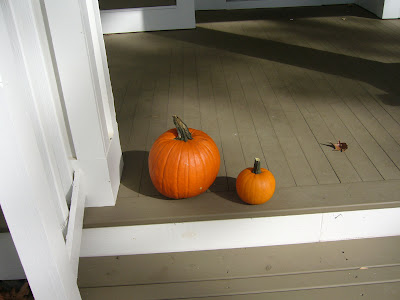 Love Halloween! The rest of the day was spent watching more football and enjoying some good eats/drinks. 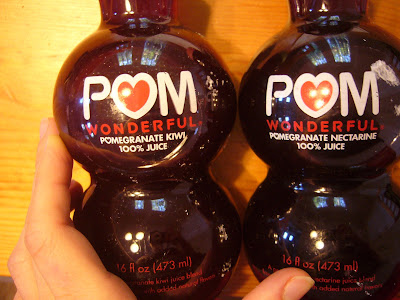 We sampled the two new POM flavors that the awesome people from POM sent us earlier this week. We both enjoyed the nectarine. Its super sweet and would be perfect mixed into some tea or used in a sweet bread. We were not fans of the kiwi….a little funky for our taste buds.

For dinner, Josh's friend Jeremy came over. The boys had grilled steak, corn, and pineapple: 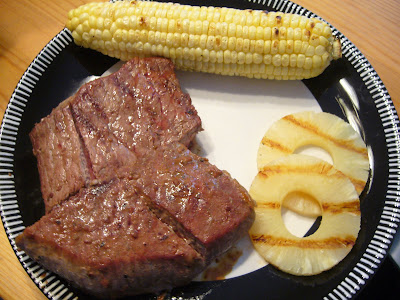 I had a monster salad: 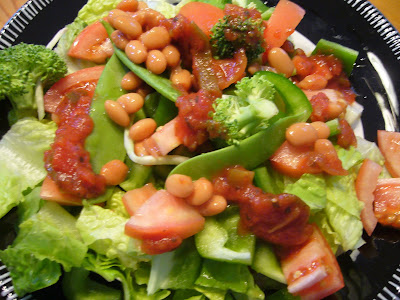 some cereal and an apple with lots of nut butter (unpictured and totally random...just one of those nights ;)).

I'm hoping to spend the rest of the night hanging out with Josh and this guy... 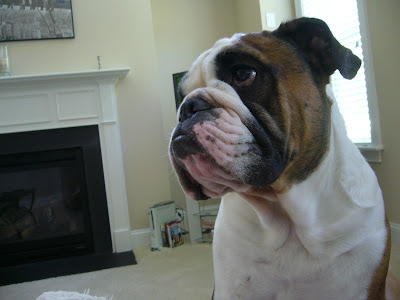 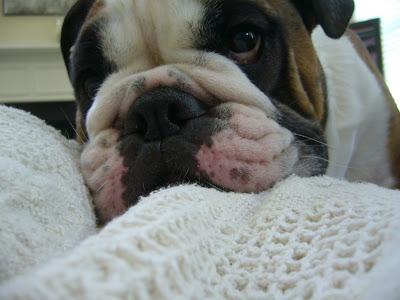 How was your weekend?
Posted by Erica at 6:46 PM

I am sort of a pickle addict--so I appreciate that you enjoyed one today (it's national pickle day!!) Haha I swear I didn't know that til I read it on another blog; but I definitely celebrated

I know this is late, but congrats on your race!!! You are totally awesome:) The pumpkins you got are too cute, as is your pooch!

Congrats girl on your race!

Frank kills me all the time!

Mike realllly wants a English Bulldog, but I've heard they are a bit of work. Your thoughts?

We have plans to go to the pumpkin patch soon. I love fall!

Your doggie is so cute :)

Cute pumpkins :-) I love seeing pumpkins popping up in the grocery this time of year - sooo good!

OMG - that Franklin face is the BEST TO DATE! God I love him! Looks like a great weekend (glad you guys finally didn't have to travel!) :)

Pumpkin picking sounds like great fun! And what could be better than pumpkin and pickles on a beautiful Sunday?

Awww, how could you say no to spending the night with that face? :)

your puppy is sooooooooo cute!!!

I can't wait until I go to the pumpkin patch/cider mill. Mmm, I can taste the donut now :)

Glad to hear you aren't too sore! That's great!! A yoga sesh sounds like the perfect post-race work out. POM in a bread? I like the sounds of that!

The wrinkles, those eyes, I'm in love with your dog! Frank is such a cutie!!

Sounds like a great Sunday to me! It was raining and freezing here so we stayed in and relaxed. It was kind of nice.

I would love to try Bikram yoga! There is a studio where I live but I'm worried it'd be too hot...

how did you like the Bikram class?? I've been to one before and liked it, but it ended up being to expensive for me!

Free bikram class!? SO JEALOUS! My roomie and I are planning to go to a pumpkin patch--I'm so excited!! Thanks for the Pom review!

What a face! It would be impossible to NOT fall in love with Franklin.

I'm with the boyz. Gimme that steak! Well okay, and the corn too.

Fun pumpkins! I was just thinking yesterday that I really need to get some pumpkins for my front porch!

what a lovely sunday!! i can't wait to pick up a pumpkin and do some fun carving! :)

Oh how I love that face (on frank lol)
I have to confess I am a pickle-addict and love those types of places that have diff. pickles barrels.

We were pumpkin twins this weekend! Wasn't it fun? I wish those kind of things lasted year-round.

Frank is looking cute than ever!

I had a great weekend, too.

Congrats on your race! :)

Omg I love this time of year--can't wait to get some pumpkins to put outside!

I just adore your Frank pictures!

Aw! Yay for pumpkin picking! We still haven't gotten ours yet, but we need to soon. I can't believe it's already October 5th.

Congrats on your race!

PICKLES. They were not involved in my weekend, sadly. :)

Ohmigosh is your doggy so cute!!!

A mama and baby pumpkin! Too cute! I painted a pumpkin with a friend and it looks horrible - no one can tell what it is. LOL.

You would totally rock a 1/2!! You are super runner girl now!

i just love fun things like going to the pumpkin patch, what a great day. and the salad looks awesome!

that is a monster salad - and it looks delicious!!!!!

That little face is so precious!

Congratulations on your race :-)
Nice pumpkins you got there. Cute pictures!

what a great weekend you had! glad the race went well :)

Congrats on the race! The Pom with nectarine sounds soo good!

Congrats on the race!!! Just read the report. That is a blistering pace, girl!

Aw...the Frankster is so cute!

I spent last weekend at Kripalu! Have you heard of it? It's the largest residential yoga center in the country and absolutely fantastic for a weekend getaway.

Happy October - you're all set with your pumpkins :-)

congrats on that 10k girl - amazing!

ummm pickles are one of my fave things ever! my g'ma used to set out a dish and everyone knew i would eat them all so they left them all for me :)

I never got to congratulate you on the race! You did awesome! Great time, too :D I love the cute lil pumpkins!

Great job on your race!! Sounds like you had a fabulous weekend! :)

I can now say I'm a road race director!! :)
It didn't go perfect but what was within my control went great! Oh and I did a half marathon Sunday plus a few extra miles.

I laugh that we did a POM TASTE TEST this weekend and my daughter gave two thumbs decidedly DOWN for the new juices :)

Yay for big orange pumpkins! My grandpa brought me the roundest pumpkin ever from his garden, and I got a ghost one too! I am paintin em' and will post pics soon :-)

congratulations on your race!! majorly awesome time - you are an absolute speed DEMON woman! Proud of you!
I had a race weekend too and it rocked! Glad you aren't super sore. I can't really walk properly so at least one of us is a normal human being!