I apologize for the absence and lack of commenting as of late! Josh's parents were in town until early Thursday and his brother & his girlfriend and sister and her boyfriend were in town visiting until this morning. We had lots of good times including dinner Wednesday at South End Brewery: 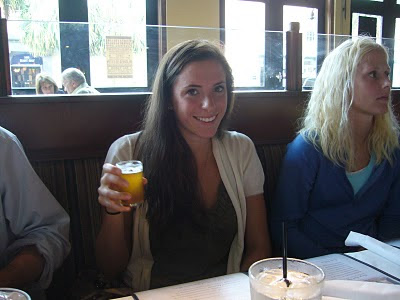 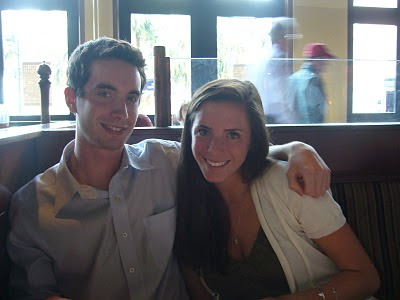 A stop at the Vendue roof top bar: 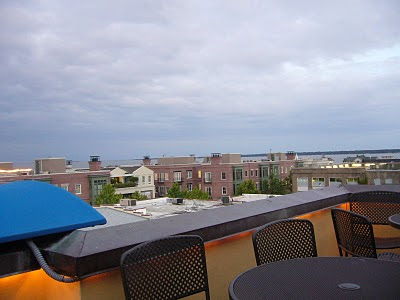 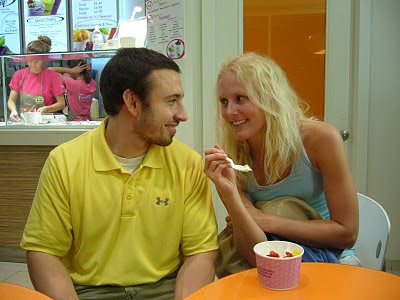 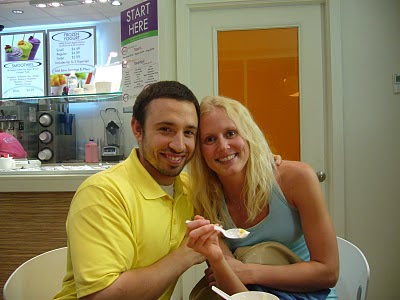 Thursday, they all hit up the beach while Josh and I worked. Thursday night, we went to Liberty Tap Room. A few of the brave ones tried the Oyster Shooters (Pearlz Peppar Vodka, Oyster & Cocktail sauce): 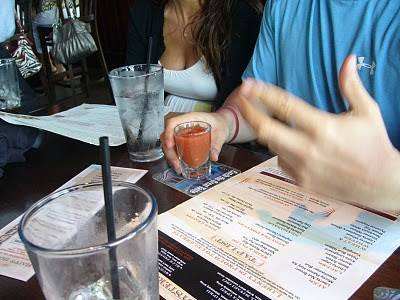 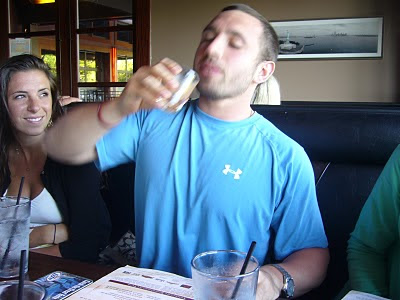 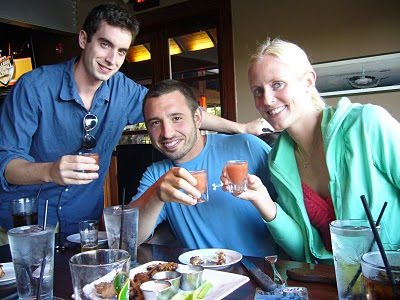 After, we stopped by Red's, so Josh's siblings could see Shem Creek: 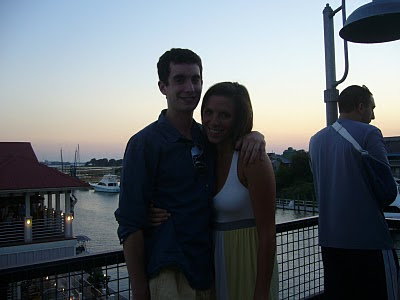 Phew! It was really nice to have Josh's family in town, especially since Josh was still recovering from his elbow surgery. I am pretty exhausted and thrilled for a three day weekend! What are you up to?
I didn't post the workout plan this week, but it went/will go as follows:
M: Quick run to warm up, taught Body Pump
T: Taught Body Attack
W: Off
R: 6 mile run outside: 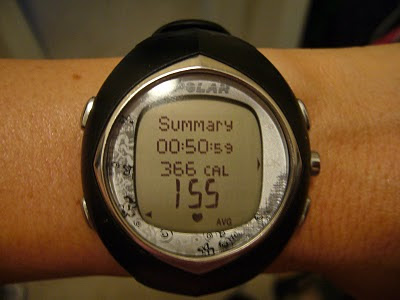 F: Teach Body Attack
S: Teach Body Step
S: Off
This weekend should be pretttttttttty relaxing. We plan to maybe do brunch and a bbq. Can't wait :)
Posted by Erica at 10:18 AM

I don't know if I could do an Oyster Shooter! Your workout plan sounds awesome. I'm going to convince my gym to get Body Attack, I need to switch it up from spin and pump!

Have a great weekend! Glad to hear that Josh is recovering well :)

What a bummer that you guys had to work while everyone else was at the beach! Boooo.

Have a great weekend! Glad Josh is doing better!

Ohh, not too sure if I could stomach that Oyster Shooter. Yowza.

Have a wonderful weekend dear. It looks like you've had a fun filled week, I bet you are looking forward to some R&R. :)

It is Carowinds :) We bought the season passes there. We are going up to Charleston on June 6th :) I am sooo excited! I had never been there. Are there any good restaurants or anything you would recommend? We are bringing the kids and staying downtown.

wow- an oyster shooter sounds intense! Now sure I could handle that! Looks like a fab week- enjoy your relaxing weekend! Glad Josh is recovering well!

you've been SO busy!! how nice for josh that he's had his whole fam around while he's recovering :) hope he's feeling better! i think it's so funny how his family looks SO much alike! and you guys always look like you have the best time.

oyster shooters? ooooof! they sound beastly. if they made a vegitarian one then you'd have to do it. hahaha. have fun this weekend!!! bbq it up :) tis the season right!?

You are brave for running yesterday. It was so hot! Well to me anyway! :) Mad talked me into eating a raw oyster for the first time a few months ago. I think I turned a pretty shade of green.

How do you bbq if you're a pescatarian?

Sounds like an excellent visit was had by all! I've had the oyster shooters once. Absolutely gross! Blah!

This weekend = ball hockey tournament and hopefully a trip to the market. Have a great one!!

Goodness, you're quick! Looks like a fun time, and I'm glad your hubs is doing well!

have a wonderful weekend!!

So ready for the weekend as well, what a week this has been! Glad Josh is recovering well and that the fam is around too, that's always nice :D

glad Josh is doing well. Have a fun weekend. We have family in town and will be having a bbq on Monday!

Melissa @ For the Love of Health said...

It's always nice to spend time with family! I bet you need a day to recoop though because it can get pretty exhausting!
I love Body Pump and need to go back to that class soon!

Have a great eve!

what a great 6 mile run time! And I love that your rest days are Wed + Sun, those are mine too! Feels so good to rest mid-week, then push hard Sat and chill Sun before the work week starts back up. Have a great weekend!

Have a FAB weekend!!!

Sounds like you've been busy having fun! Hope your weekend is just as awesome:)

have a great weekend erica and bless you, for dealing with all the outta towners. love them, you know, but it's still sometimes, well ya know. hugs babe :)

glad to see a post! ive been missing your blog :) glad to hear you've been getting some quality time in with family! what a great rooftop view. awesome time for 6 miles. speedy gonzales! have a great holiday weekend!

I would definitely not be brave enough to do the oyster shooter. Did they like them?

Have a great weekend!

It's cool that you show everyone around like you do--it always looks like you guys are having a blast! And good food is always involved :-)

oh what a fun week with the family! it sounds like you got to have some great company and fun eats out!

i've been slacking majorly with the commenting and reading, no worries! :D

Looks like fun, enjoy the rest of your weekend!! :)

Okay, so I've never had oysters, but that sounds pretty gross! ;-) Hey, I guess you only live once, though!

Glad you have a relaxing weekend ahead - love that it's officially the start of summer!!

I adored Les Mills classes especially Body Pump. When I was in NZ for a month last year I actually did Body Pump at the same gym that it all began from! Nice blog!

Great get together! Love the pics!! Nice workouts - i've take a few too many off days - eek - hope to get/stay motivated tomorrow and the rest of the week!

how fun to have friends and family in town. the oyster shooters sound so good, i've never tried them, but i'd like to!

I loved NZ and I have some lovely friends who work at Les Mills if you ever make it, let me know I will make sure they look after you!!

Here, I posted a little about it:
http://girlonraw.com/2009/10/im-back-albeit-a-little-jetlagged-and-ive-been-home-for-over-a-week/

Enjoy your R&R time my love! This is what weekends are for....ahhh catching up!